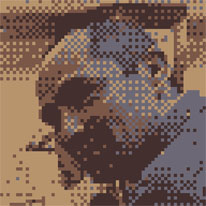 Rushing Pixel's game creating roots originate from the demoscene, especially the Commodore 64 platform. Back in 1997 a bunch of friends tried to create their own game called Find the Pair. Sadly this simple memory game never got to the shelves. Despite having decent graphics and digitized voice-over it was never finished. A similar story happened to their next attempt, Grubz, a Worms-clone in 2004 which even had network multiplayer support never seen on the C64 before.

Rushing Pixel's founder, Balázs 'poison' Oszvald entered the professional game industry in 2005. Among others he was involved in games like Warhammer: Mark of Chaos, Warhammer: Battle March, Crazy Taxi Fare Wars, Thunder Wolves, The Incredible Adventures of Van Helsing series and Warhammer 40000: Inquisitor - Martyr. Meanwhile, multiple attempts happened to create an independent product as a side project. The most advanced example was Gemsqueezer for iOS, a logic/puzzle game that had a playable preview with 100 prefabricated levels. Ever since this game is on the to-do list.

Still possessed, in 2016 Rushing Pixel was born. The domain was registered on November 19, 2016, and Puzzle Adventure's development started. ...and 10 months later it was canceled due to lack of the "fun factor". The prototype of another game idea, Turn It On! proved that the development needed a completely different direction. Hopefully, players are going to agree!

As an indie undertaking, Rushing Pixel is thankful for a bunch of (mostly) free and (mostly) open source software, like Unity, Blender or Krita.